I don’t remember where was I reading first about Caudalie Anti-wrinkle Face Suncare SPF50  and their new sunscreen range,  but I remember me being very intrigued about their non-toxic for the marine ecosystem and biodegradable formula.
That alone sold the product to me.

Sunscreen is vital for skin protection, and is one of the best anti-aging products there is, but may cause some serious environmental threats.
In 2016 study by Craig Downs and  Haereticus Environmental Laboratory confirmed that the lotion we slather on our face and body to protect our skin can also do serious harm to the coral reefs and damage the marine ecosystem. 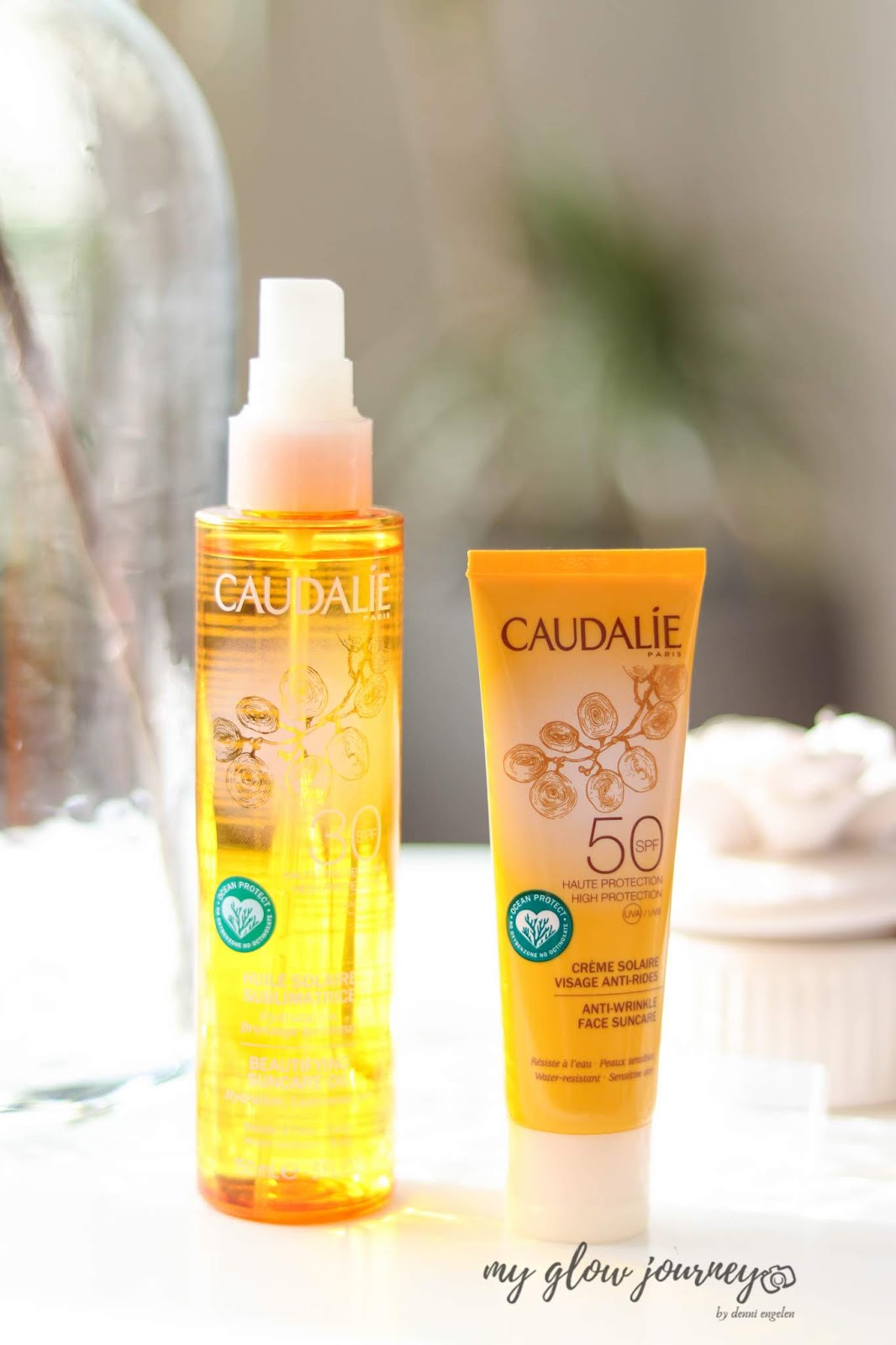 Since then, the story got a lot of press scrutiny, and the evidence suggesting that chemical and organic sunscreens are harming the coral reefs has only gotten stronger.

The list of environment pollutant ingredients commonly found in sunscreens :

Oxybenzone, Octinoxate,  4-methylbenzylidene camphor, Octocrylene,  Para-aminobenzoic acid (PABA), Methylparaben, Ethylparaben, Propylparaben, Butylparaben, Benzylparaben, Triclosan,  Any form of microplastic sphere or beads, Any nanoparticles like zinc oxide or titanium dioxide.
Physical sunscreens containing zinc oxide and titanium dioxide tend to be greasier and tougher to blend in and leave behind a massive white cast. Not a look we go for.
Choosing the right sunscreen for the earth in detriment of the way we feel wearing it is also not a sustainable choice.  Nobody likes joyless skincare, nobody wants to walk around feeling like a greasy ball and look like a ghost.

So, it’s easy to understand why I am so excited about the new Caudalie sunscreens.

I did a little bit of research, asked some questions and wrote everything down maybe it helps you too. 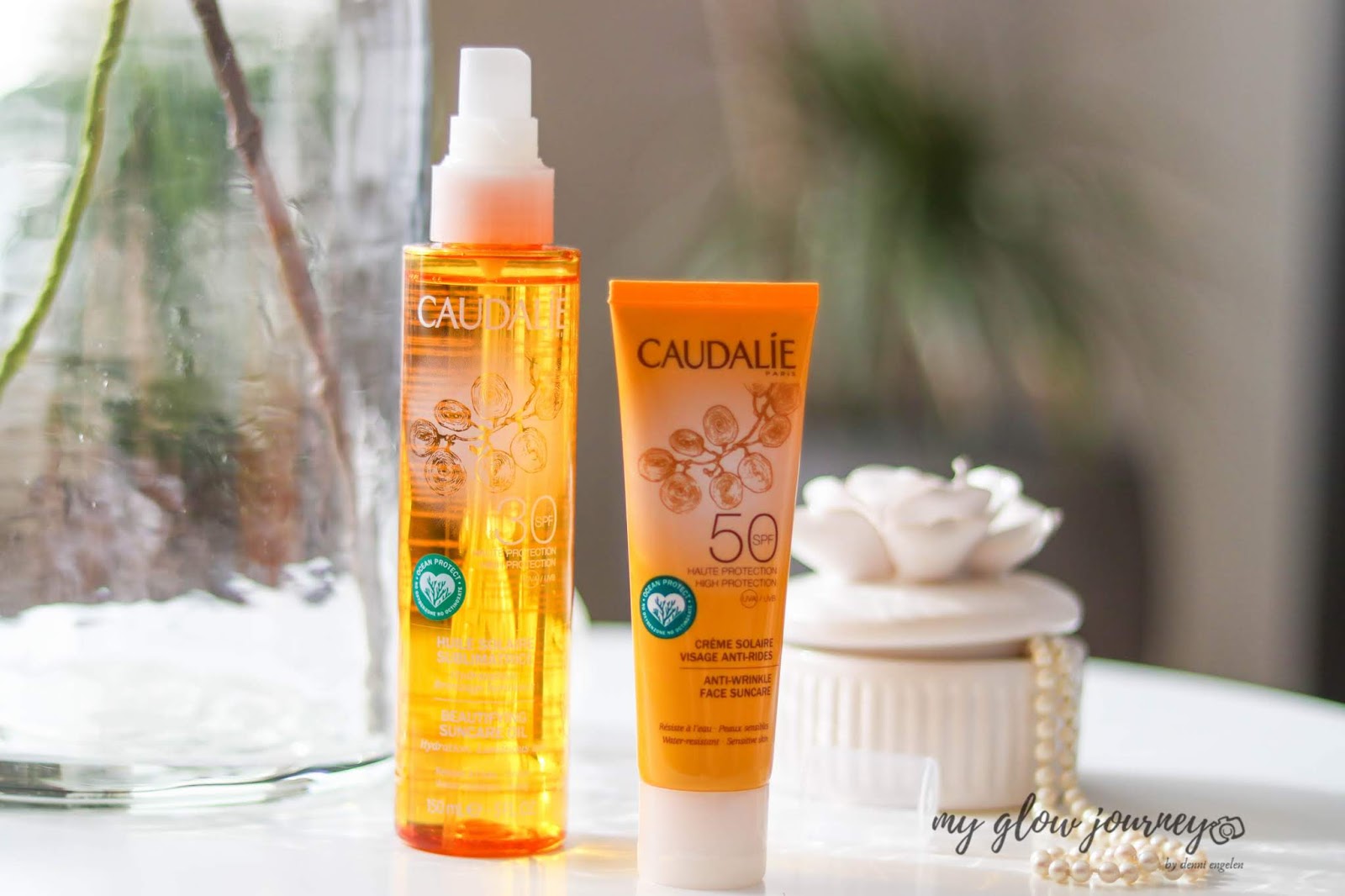 What to look for in Eco-friendly sunscreens?
Ideally is to avoid sunscreens containing oxybenzone and octinoxate – they’re on their way out and very damaging to the oceans.
Where possible, choose Eco-friendly sunscreens free from parabens, petrochemicals, and silicones.
Why? In given year tons of sunscreen end up in oceans and that just by us slathering on SPF and going into the water or showering.
For example, oxybenzone: one of the worst ingredient in sunscreens guilty for poisoning coral reefs, bleaching it, disrupting its growth and its reproductive abilities.
Some of the harmful ingredients are banned, but the cosmetic industry has different rules and standards in different parts of the world; So it comes down to us to make the right choice. There is no planet B, so there’s never been a better time to invest in Eco-friendly SPF formulations.
2019 echo friendly sunscreens
Article & Photos by Denni Engelen 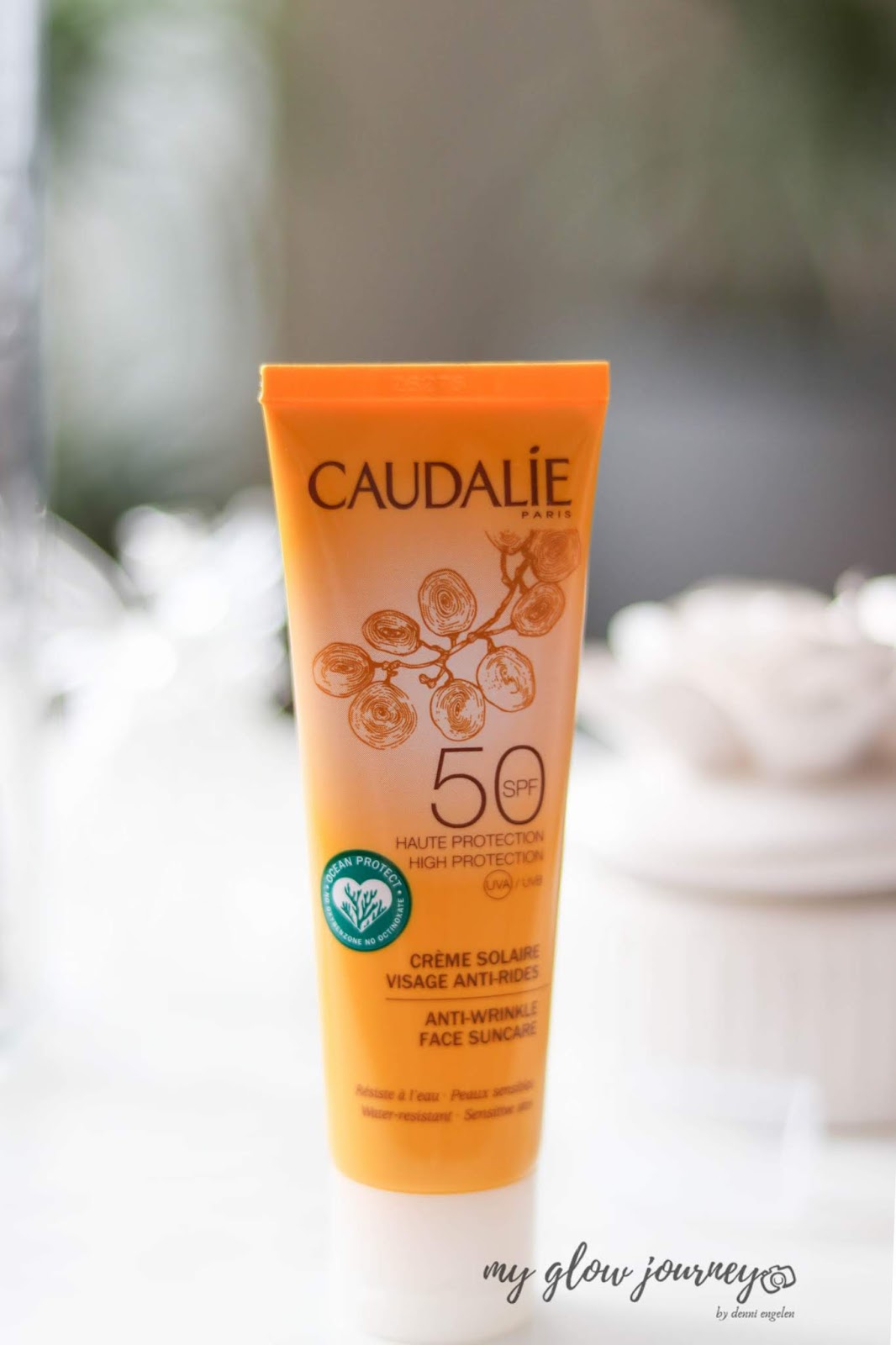 What is it
Anti-aging facial sunscreen with a very high protection factor,, and biodegradable.

Who is it for
Suitable for all skin types

How do you use it?
As a last step in the skincare routine.
Apply generously and evenly before sun exposure. Avoid the eye contour area. Reapply every 2 hours and after bathing.

Its summery fragrance delicately envelops the skin in notes of frangipani flowers.

Equally protective for the skin and nature, its formula is highly biodegradable and non-toxic for the marine ecosystem.
Benefits :
•    SPF50 sun protection
•    Protects against signs of aging
•    Hydrates and soothes
•    Water-resistant
•    Respects the marine ecosystems

What is in Caudalie  sunscreen

Isoamyl p-Methoxycinnamate– also  known as Amiloxate, it is an ultraviolet Light Absorber

Butyl Methoxydibenzoylmethane– also known as Avobenzone and its role is to absorb ultraviolet light over a wide range of wavelengths and then convert it to less damaging infrared radiation.

Titanium Dioxide – Titanium dioxide works as a UV filtering ingredient in sunscreen – it helps protect a person’s skin by blocking absorption of the sun’s ultraviolet light; however, it doesn’t protect against the whole range of UVA rays.

Bis-Ethylhexyloxyphenol Methoxyphenyl Triazin – a bit of a mouthful and only approved in Europe it seems to be one of the best sunscreen agents known today.
It’s broad-spectrum covering the whole UVB and UVA range, and unlike older sunscreen agents, it’s very photostable.

Where to buy
Lookfanstatic, Caudalie

Can be used around eyes?
No

Packaging:
Caudalie Anti-wrinkle Face Suncare SPF50 comes in an orange cute squeezable plastic tube with the cult by now Caudalie design on it. Packaging:
Almost similar to the old sunscreen, but the new version has a green ‘ocean protect”emblem on it.
On the cardboard packaging, you get the inky list and how to use the advice.

Texture:
Caudalie Anti-wrinkle Face Suncare SPF50  has a fondant texture and a  non-greasy feel to it.

Fragrance
Caudalie Anti-wrinkle Face Suncare SPF50  is lightly fragranced, floral (frangipani), the scent does not linger and it hasn’t caused any irritation to my skin. 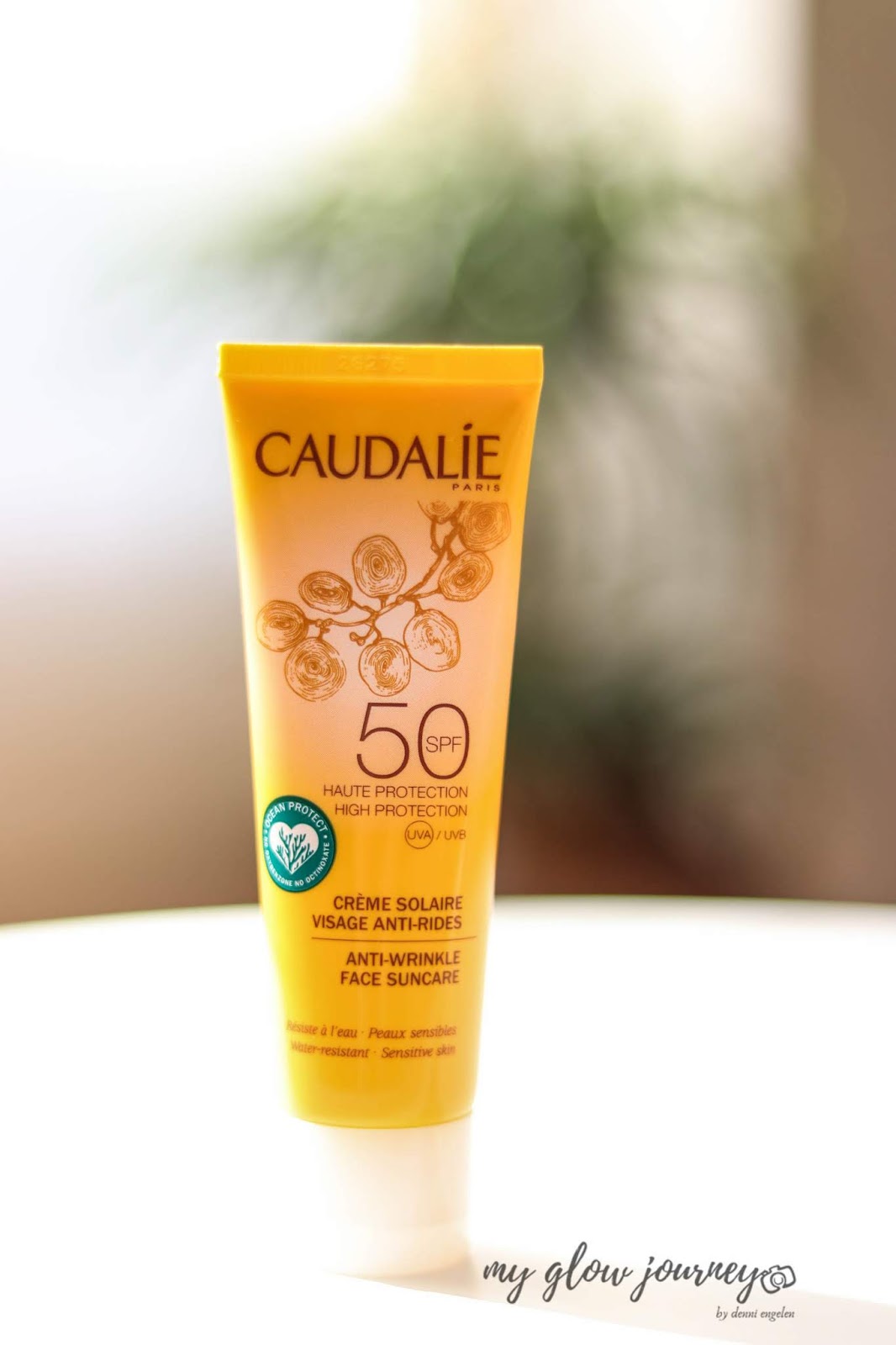 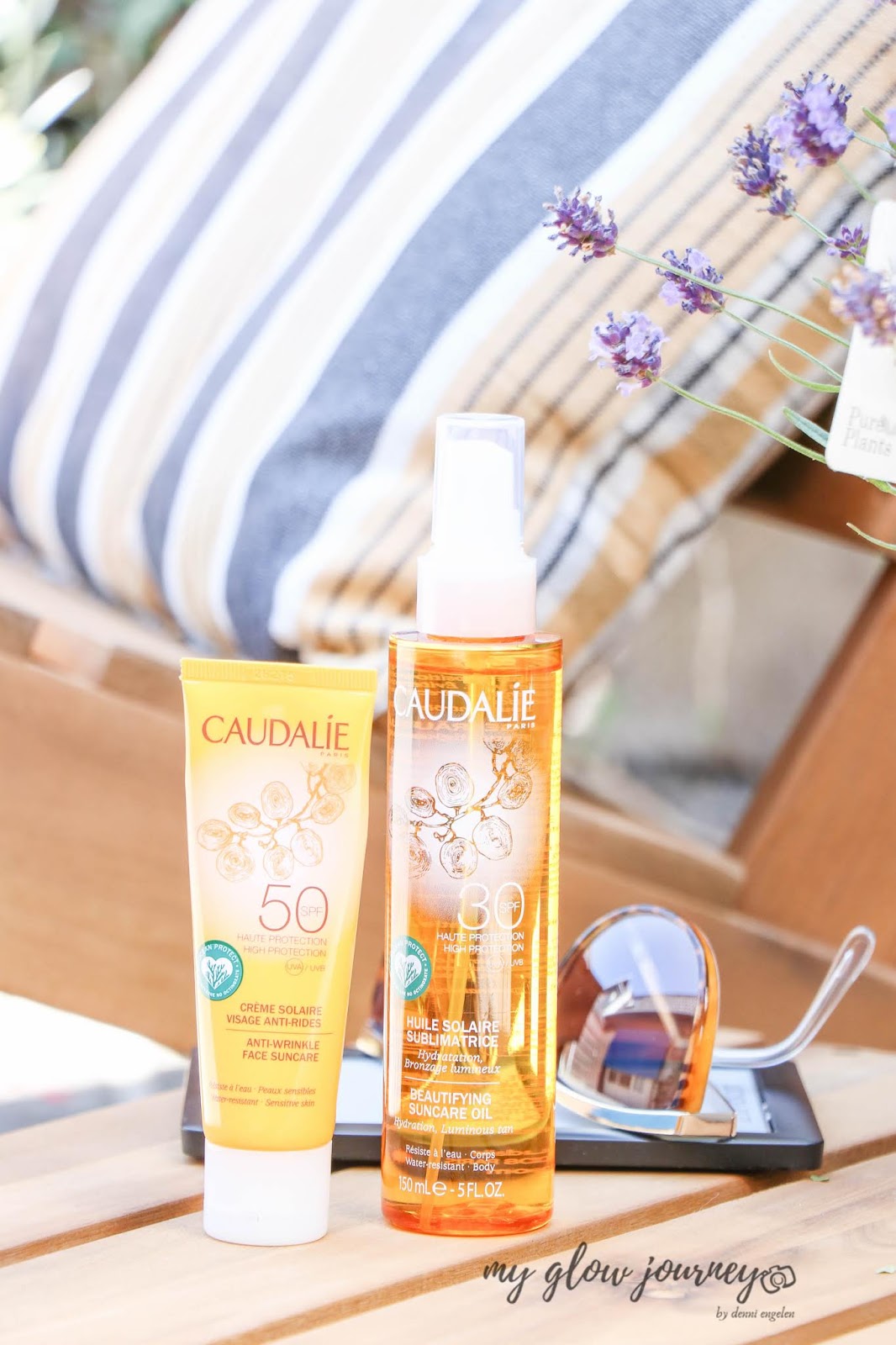 My experience with it
At first glance, Caudalie Anti-wrinkle Face Suncare SPF50  seemed to be a bit too much for a hot summer day.
It applied thick and white, I did not know what to think about it, but to my surprise a minute later, my face was looking plump hydrated and glowy. No white cast no greasiness, just beautiful, radiant skin.
I wore it by itself, cleanse, mist and SPF, and it eas enough for my skin; however, If I want to go the whole nine with the skincare that day it also layers well, it doesn’t pile, and it feels pretty weightless.
I don’t wear a lot of makeup during the summer but for the seek of testing I also tested Caudalie Anti-wrinkle Face Suncare SPF50 under makeup, and I have no complaints. My makeup looked pretty good the whole day.

What I didn’t like about
Certain sunscreens make my eyes sting and burn, and I’m having this issue with Caudalie Anti-wrinkle Face Suncare SPF50 but only for the first couple of minutes. Afterward, it stops.
It may be my sensitive eyes though

Would I repurchase?
I would like to revisit this question later,  most probably yes I would repurchase, but at the moment I have a ton of sunscreen on my desk waiting to be reviewed. 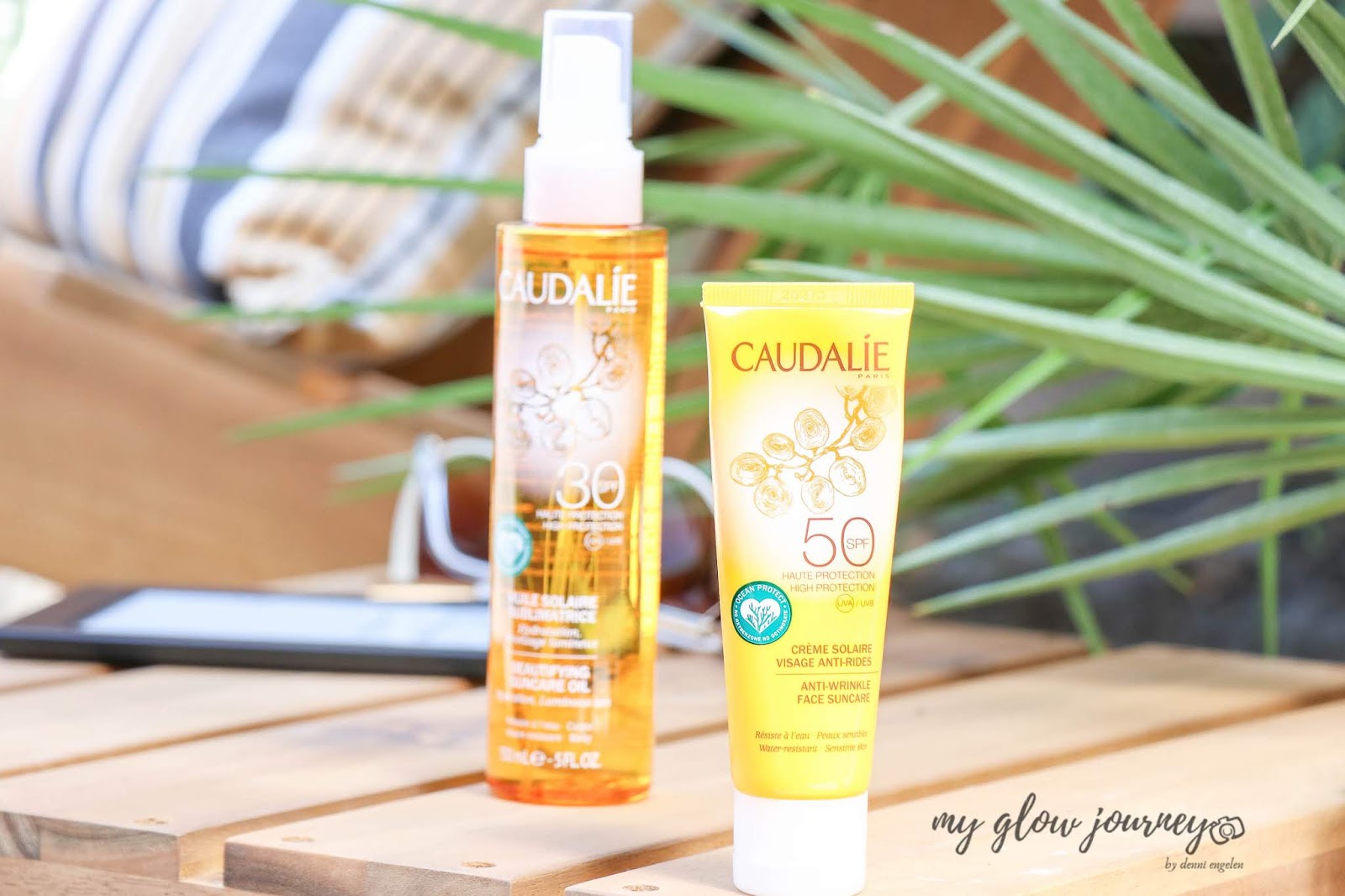 How does the new Caudalie sunscreen range look to you? Did you purchase anything yet?
What do you look for when purchasing a new sunscreen?

Oh, Hi... welcome to my blog! I'm so happy you are here ! Please stay awhile... Help yourself around, and if you like please subscribe! Thank you for your time ! Denni

welcome to myglowjourney! I'm so happy you are here ! Please stay awhile... Help yourself around, and if you like please subscribe! Thank you for your time !